Austin, Texas, continues to live by its mantra “Keep Austin Weird”, but one of the weird things about the city is the lesser realized fact that it is a flood hazard for homeowners. Central Texas is where our capital city resides. There are many opportunities to float the river and you may think it’s inland enough for it not to be affected by hurricanes, but you’d be surprised that flash floods are a threat to homeowners in the city. 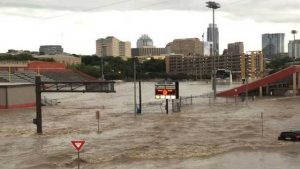 Another major factor for Austinites is the fact that even with increased living costs over the years, it still continues to be a favored place for people to move. There’s still a great music scene, nightlife, culture, and job market, which means more development. These developments mean more concrete which leads to harsher runoff and more flooding potential.

These threats mean that if you are going to live in Bat City, you are going to want to inquire about flood insurance in Austin, Texas. A homeowners insurance policy is a powerful tool to protect your home but it will not cover damage from flooding. Both private flood insurance companies as well as federally backed programs are available and can help you offset the hefty costs of restoring your home after a flood.

As many as 25% of all flood insurance claims come from homes outside of flood zones. This means that no matter if you reside in Montopolis, North Austin, Barton Creek, or any other neighborhood, you need to understand that the threat of flooding applies to everyone. Get to know your options and stay protected with a flood insurance policy that won’t cause you to overpay.

Did Austin Flood During Harvey?

Yes, and although Austin, Texas, suffered mostly from street flooding during Hurricane Harvey, there were still over 5,500 properties that were affected by flooding due to the storm. Flooding in Austin, Texas, continues to be a problem both because of the remnants of storms coming from the Gulf of Mexico and the area’s natural rainfall which can produce flash floods.

On average, flood insurance claims reach $31,000 for homeowners, making the small investment of hundreds of dollars each year an affordable option to offset the risk of restoring much larger losses. Don’t be fooled, either. Even a small flood can cause extended damage and lead to other issues that compromise the integrity of your home such as mold damage or problems with your home’s foundation.

Protecting Yourself From Flooding in Austin, Texas

When Austin floods, homeowners can be on the hook for the costs of repairs if they are not properly covered. Homeowners insurance won’t help you in almost any flooding event and the cost of repairs can skyrocket quickly. A flood insurance policy in Austin, TX, will help restore losses should water enter your home from excessive rainfall, a failed dam/levee, or if a body of water, such as the Colorado River, were to overflow.

It’s important to note, however, that flood insurance also has limits on what it will protect. For example, sewer backup or burst pipes that cause water damage are not covered. You’ll also not be covered for a busted pool or overflowing fixtures. The idea for your flood insurance protection is to basically cover a flood event caused by weather that has caused a piece of land that is normally dry to become wet.

The National Flood Insurance Program (NFIP) provides two different types of coverage that can protect you during a flood. Building Coverage is there to protect your home and the things that make up your home including permanently installed carpeting, your foundation, detached garages, etc. Contents Coverage seeks to restore losses to your personal possessions items including carpet that is installed over another flooring, portable and window AC units, furniture, etc.

Together, both coverages can help you better protect your home and everything in it. It’s a great compliment to your home insurance policy, and using NFIP’s maximum coverage helps best protect your investment against one of the most destructive events a homeowner can face.

In addition to these government-backed options, private flood insurance is available for homeowners. Flood insurance in Austin, TX, from private insurance companies, can help you customize your protection and shop among various brands to help determine the lowest rate for your coverage. Ask an agent for a flood insurance quote. Our team is here to help you find the most affordable form of protection for your needs.

The top threat to Austinites when it comes to flooding is flash flooding. Austin flash flooding events continue to present a threat in the city and surrounding areas. In Austin, Texas, flooding is a growing issue as the city’s population continues to increase and development continues to contribute to a lack of runoff for rainwater.

Texas has plenty of extreme weather threats, but Central Texas is known for severe thunderstorms that can bring with them massive amounts of rain all at once. A home insurance policy is great for protecting against potential hail, wind, and lightning that can cause damage, but the flooding Austin homeowners may face during such storms requires separate coverage. A flood insurance policy helps you safeguard your investment and enjoy the peace of mind that knows that if the worse should happen because of a flood, you’ll be covered.

The FEMA Flood Map Service Center is a great resource for homeowners to discover exactly where their homes stand regarding their flood zone. It doesn’t matter where your home is located. Flooding can occur anywhere. But having such knowledge is still useful and you can better prepare, especially for homeowners near flood plains, coastlines, or other high-risk flood areas. Learn more to better manage the risks surrounding your home.

A home insurance policy isn’t blanket coverage, but it will protect you from a range of things that might happen. Examples include losses from windstorms, hail damage, theft, wildfires, damage from aircraft, etc. Flooding, however, does require a separate flood insurance policy for protection.

Your flood insurance policy is a specific coverage built to help you restore losses in the aftermath of a flood. There are some incidents in which water damage is covered through a standard home insurance policy, but it must be accidental and can’t include water damage from flooding that comes from outside your home. Flood insurance continues to be the best form of protection homeowners in Austin, Texas, have to help mitigate their losses in the event of a flood.

Austin flash flooding continues to be an issue that will have to be addressed by homeowners for the foreseeable future. Austin flash floods are a natural part of the landscape and with projections showing that the population of Austin, TX, is going to continue to grow, flooding will continue to be a growing problem.

A common misconception is that homeowners need to overpay for flood insurance that won’t provide the coverage they will likely need, but here at Freedom Insurance Group, we approach protecting your home differently. By comparing your coverage needs so that you get the right amount of protection for the lowest price possible.

Contact one of our agents for a flood insurance quote and to find cheap flood insurance built around your home’s needs. We’ve been helping Austinites since 2005 and are committed to keeping homeowners secure all while paying less.

FAQs About Flooding in Austin, Texas

As Austin flooding continues to be an issue for native residents and the influx of new blood moving into the city, it’s only natural that there are going to be more and more questions. We’re happy to help homeowners with any questions they might have. Freedom Insurance Group is here for you!

But some questions are more frequently asked, and we’ve compiled some of them below. Our FAQ on Austin flooding can help you stay informed, or contact one of our agents to learn more about how you can protect your home from flood damage today.

Does Austin, Texas Get Hurricanes?

No, you won’t have to worry about a direct hit from a hurricane in Austin, Texas. The city is too far inland and by the time the remnants reach Central Texas, they are much weaker than what has hit the Gulf Coast region. However, this doesn’t mean that flooding can’t occur, as was the case when the remains of Hurricane Harvey brought large amounts of rain to the region.

Does It Flood in Austin, Texas?

Yes, Austin, TX, is located in one of the worst places for flash floods in the country. Central Texas’s ability to flood has earned it the nickname “Flash Flood Alley”.

Do You Need Flood Insurance in Austin, Texas?

Yes, all homeowners need flood insurance. Beyond Austin flooding due to heavy rainfall and flash floods, the threat of flooding continues to be a pressing issue as more and more non-traditional areas are seeing floods threaten or destroy homes.